It is understood that the 12-meter and 18-meter double source trolleybuses will arrive in Mexico in July and October this year respectively. All the buses will be put into operation in its capital Mexico City. The buses in operation will greatly improve daily travel of Mexican citizens, and effectively reduce environmental pollution, which will set a benchmark for global electric travel, leading the global green travel.

From the first to the largest batch, Yutong leads green travel in Mexico with strength

Mexico City, the second largest city in the world, with a population of about 22 million, is the most populous metropolitan area in the Americas. In recent years, as local economy grows and urbanization accelerates, urban air pollution and traffic jam problems are becoming increasingly serious. In order to alleviate these problems, Mexico City vigorously develops BRT lines and promotes green travel.

In 2019, the first Yutong double source trolleybus arrived in Mexico City, stepping the first pace of green transportation reform in Mexico. At present, sixty-three Yutong 12-meter double source trolleybus have been operated in Mexico City over five months. The high product quality and Yutong perfect after-sales service have been highly appreciated by the local government, customers and citizens.

It is worth mentioning that, more than 50% of other buses in Mexico City were temporarily suspended due to the impact of the pandemic, but all sixty-three Yutong double source trolleybuses were in normal operation thanks to their environmental friendliness and comfort. The overall operation was stable and punctuality rate was up to 100%. An electric vehicle operation director in Mexico City said: “After the Yutong double source trolleybuses came into operation, line capacity has increased from 66,000 to 100,000 ridership at average daily, while overall line running time has been shortened by 40%.” Citizens of Mexico City said: “Yutong double source trolleybus is stable, comfortable and quiet. It is a very comfortable choice, especially for the elderly.” It is understood that, this batch of Yutong double source trolleybuses adopt dual-powered system composed of “power battery + power grid” It not only can fully use efficient charging and discharging characteristics of the power battery to reduce vehicle power consumption, but also achieve more energy-saving effect through the braking energy recovery and energy management. Tests show that, Yutong double source trolleybus can save more than 30% in fuel costs compared to fuel-powered bus with same body length. In terms of safety, Yutong double source trolleybus adopts an isolated DCDC system, which provides secondary insulation for the entire vehicle, making it safer than similar products. In addition, in order to fully adapt to local road conditions and the climbing requirements of viaducts in Mexico, battery and motor of Yutong double source trolleybus meet the requirements of EU certification standards. Furthermore, high-power drive motor is used to improve the power performance and climbing capability.

In fact, the “Development and Industrialization of Dual Source Quick Charging of Yutong Full Electric Bus” project has been included in 2015 National Science and Technology Support Program. It represents not only the development direction of double source trolleybus in China, and also the world's leading technical level of new energy bus.

Not only in Mexico, but also in Latin America and the world, Yutong holds a high market share by virtue of its excellent product quality and precise market strategy of “one country, one policy”. Customs data shows that, by the end of April 2020, over 23,000 Yutong buses are exported to the Americas market in total, accounting for more than 53% in China export volume of large and medium-sized buses, becoming the No.1 China bus brand in Latin America. 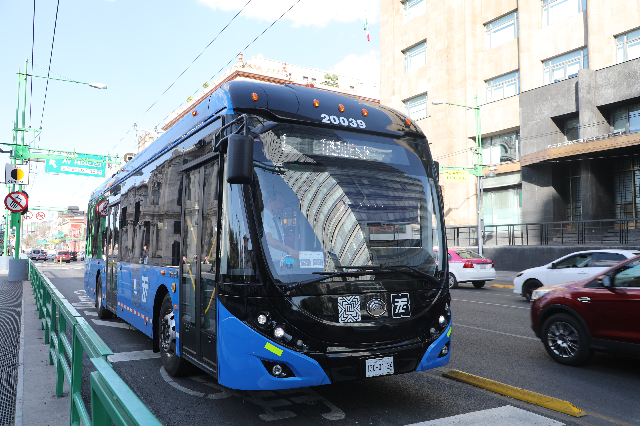 In overseas markets, as of April 2020, Yutong has exported a total of 73,000 buses, and its sales and service network has covered major overseas markets such as Europe, CIS, Latin America, Africa, the Middle East, Asia-Pacific and other major overseas markets., The products have been exported to dozens of countries and regions including Britain, France, Russia, Israel, Saudi Arabia, Chile, Colombia, Australia, Malaysia, Philippines, Hong Kong, Macao and Taiwan China. Yutong is boosting better global travel with leading technology and products.

In the future, Yutong Bus will continue taking product and technology as the foundation, and continuously strengthen its overseas market strategy and service network construction. Yutong will continue deepening the “China imprint” with quality and strength and contribute to global better travel with Chinese products, Chinese wisdom and Chinese solutions.