In mid-July, 102 units of Yutong full-electric buses began to be shipped to Norway.

The order was a landmark in Yutong’s 15-year globalization, and also an important milestone for Norway in North Europe: the biggest full electric bus order in Norway and the Europe at large. After all the buses are delivered and operated, Norway will further advance its electrification of public transport.

From its earliest entry into the European market to the fast expansion in North Europe, Yutong is braving waves and embarking on a new voyage for Chinese smart manufacturing.

Keolis Group, who signed the biggest order in Norway with Yutong, is a global leader in public transport operation, and it serves over three billion passengers in 15 countries, covering Europe, Asia-Pacific and North America. Its branch in Norway undertakes the tramcar business in Bergen, and it will put the electric buses purchased from Yutong in its new urban public transport business. Keolis has long been reputed with its high-standard operation among local governments and people. Thus, Yutong’s winning the bid proves its product quality and brand reputation fully meet strict standards of international operators. With the successive delivery of the 102 new energy buses, Yutong and Keolis will jointly provide better green modes of transport, and help Norway achieve the carbon emission reduction goals. An old Chinese adage says, “A journey of one thousand miles begins with the first step.” Likewise, the breakthrough in Norway’s market can be ascribed to Yutong’s ten-year efforts in the European market.

Amazingly, no fault happened during the 18-month operation in Iceland. Their ultra-high driving range, low power consumption, low noise, and high comfort were well received among bus operators and passengers in Iceland. As said by Benedikt G. Guomundsson, CEO of Yutong’s partner GT Group in Iceland, “It is far beyond our expectation. Yutong not only provides excellent products, but also offers us best after-sales services. It really demonstrates the reliable image of products made in China.”

Of the five countries in North Europe, Yutong has sold its buses in four ones, which proves Yutong’s electric buses not only stand the test of the harsh environment there, but also pass the test of high bus requirements in that region. Yutong has become the trustworthy green bus brand among bus operators and residents there.

The E12 electric buses delivered to Keolis Norge in batches are of high reputation in Europe. Denmark firstly purchased the bus models and put them in operation.

It was learned that Yutong manufactured the prototype only two months after winning the bid. Keolis Norge also came to Yutong on January 19 for acceptance check and on-site visits.

The delegation of Keolis Norge spoke highly of Yutong’s scale of production, and technological reserve in new energy buses. In addition, the production efficiency of sample models also increased the confidence of Keolis Norge in Yutong’s delivery capability.

As introduced by the person from Yutong, the order was finally completed earlier than the required time. Impacted by the COVID-19, our Norwegian customers could not inspect buses on site. However, both sides creatively adopted the “Cloud Bus Inspection” mode, and examined the appearance, interior, performance, and road test through live video. In the end, all the buses passed the factory acceptance test. 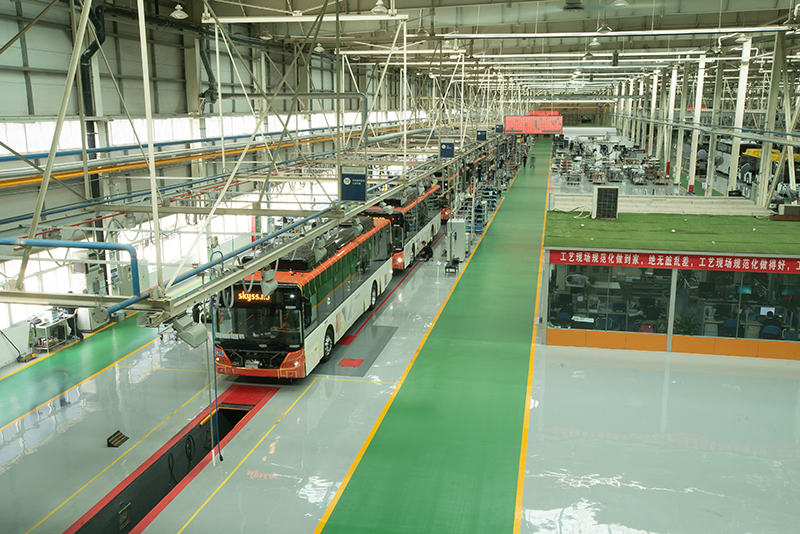 It is estimated that 102 Yutong full electric buses will run in the streets of Bergen, providing more eco-friendly and comfortable public transport service for the picturesque city.

Boasting the heartland of automobile industry in the world, Europe has long been the target market of Chinese ambitious bus brands.

Yutong’s success in opening Norwegian market with a record order can be attributed to its competitive quality products.

Norway, located in the west of the Scandinavian Peninsula, is called “Country of Ten Thousand Islands”. It has complex terrains and diverse climate conditions. The city Bergen where Yutong buses will be operated is known as European “Rain Capital” because of over 200 rainy days in a year. Thus, the temperature, humidity and terrain are the touchstone for the electric buses.

In light of actual conditions, Yutong sent engineers to Bergen to collect road spectrum and customize power system plans based on operation routes to improve control strategies, and meet actual operation requirements. After the full understanding of their special requirements, Yutong developed the three-point safety belt high back seat, and guide dog folding chair to adapt customers’ habits, which won the recognition of customers.

In addition, the IP68 Waterproof Grade of “Three Power System” (electric drive, battery and power control) is adopted in the buses, which guarantees safe operation of buses even they are immersed in water for 24 hours.

“Before designing these buses, we have fully consider the rainy weather there. Thus, we seal the chassis, and adopt special protection of the pipes of the chassis.” The engineer added, “Yutong has never satisfied with meeting tendering requirements. The technical indicators of these buses have reached the top-tier level in Europe.”

Besides quality in technical indicators, the efficient power system can lower power consumption, and help customers reduce operation cost and achieve both economic and environmental benefits.

The ingenious products also won the recognition of Keolis Norge. As expressed by Gry Miriam Olsen, CEO of Keolis Norge, “after the 102 electric buses are operated, 3.8 million kg of CO2 will be reduced in Bergen every year. We are glad to sign the order. We are confident that our close cooperation will help us open another door for future cooperation.” As the leader of Chinese bus industry, Yutong Bus, since its entering into European market in 2010, has constantly expanded its market in both quantity and scope. It has won the reputation among European customers with the reliable products and considerate services. The biggest electric bus order marks Yutong’s new journey in expanding its market in Europe. With the tighter carbon emission standards in the EU and North Europe, Yutong will embrace a brighter prospect in Europe’s electric bus market.