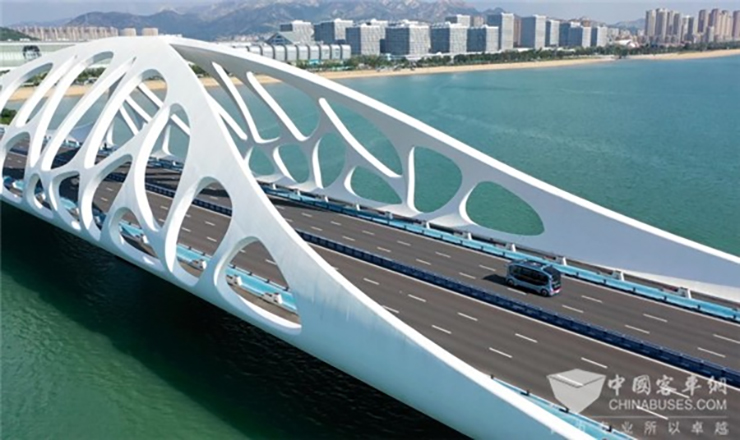 In the morning, Xiaoyu 2.0 became the spotlight with light blue “look” and unique modelling design in the beer city of Golden Beach in the west coast new zone of Qingdao.

According to the introduction by the staff, the intelligent driving bus is manufactured by Yutong. It is 5.5 meters long, 2.05 meters wide and 2.65 meters high, with a maximum passenger seats of 12 and a maximum speed of 40 kilometers per hour..

Then, citizens began to board the bus for trial ride. Seats are evenly separated by a on-board table in the middle of the compartment . There is no steering wheel in front of the bus, while two display screens are installed on the roof of the bus. The bus is covered by large windows around the vehicle, providing excellent vision. Then, the safety officer used a tablet electronics in his hand to start the bus. "By entering a destination, the bus can automatically drive to the destination and detect whether there is a traffic jam," he introduced. The bus went smoothly on the way ... When encountering an intersection, the turn signal lighted up in advance, the bus automatically turned into the other side of the road; When driving to a section of road, there was a pedestrian crossing the road suddenly. Xiaoyu 2.0 automatically braked to stop and waited for the pedestrian to leave before driving. When there is a car behind trying to overtake, Xiaoyu 2.0 can also to give way very "cleverly"...

On the road of in the beer city of Golden Beach, there are a lot of traffic and pedestrians. Xiaoyu 2.0 can not only automatically steer, slow down, stop, but also do not need any human intervention during whole trip. The fully automatic and intelligent operation amazed the citizens who experienced the bus.

Unveiling the technology behind intelligent driving

Such a magic traveling experience brings a lot of surprises to the passengers. So, how did Xiaoyu 2.0 make it? It is understood that Xiaoyu 2.0 is equipped with millimeter wave radar, laser radar, cameras, visual cameras and other various sensors, and has blind spot monitoring, lane level traffic light signal coordination. They are like "eyes" of Xiaoyu 2.0 and can help Xiaoyu 2.0 to understand the surrounding situation. At the same time, based on the all-day and all-weather sensing technology with 360° coverage, Xiaoyu 2.0 can also realize intelligent decision-making functions such as intelligent following, intelligent overtaking, lane-changing and intelligent avoidance of obstacles within 250 meters around. It is one of the most advanced intelligent buses in China.

At the site, citizens who took the bus said that the experience exceeded their expectations. Among them, a senior bus enthusiast said that he has tried many intelligent driving vehicles and he is very interested in the application of intelligent driving technology in the field of public transport. "The ride experience was better than expected," he said. "Firstly, the ride was faster and more intelligent than expected. And the ride was very comfortable." A student from Shandong University of Science and Technology also said, "The speed of the bus is faster than expected. The average speed is similar to that of a normal bus. At the same time, the bus runs smoothly and avoids obstacles in time so it's very safe when driving."

This time, the trial run of Yutong intelligent driving bus in Qingdao has not only enabled citizens to feel the charm of science and technology, but also contributed to the practice and transmission of the concept of Green Travel in Qingdao. Xiaoyu 2.0 was developed and manufactured by Yutong. Yutong is a "pioneer" in the field of commercial vehicle intelligent driving. As early as in 2013, Yutong has built a intelligent driving R&D team, which mastered the five major intelligent driving technologies, namely multi-perception fusion sensor, decision making and planning, redundancy and wire control actuator, on-board computing platform and cloud-control platform. Apart from that, Yutong has also obtained 28 patents related to national intelligent network connection technology and 25 national, provincial and municipal awards.

In terms of actual operation, Yutong have also accumulated rich experience. In Zhengzhou, Yutong intelligent driving bus has been operating safely for over 700 days and in Yutong Industrial Park, wisdom island, financial island. The total number of shuttle passengers is more than 360,000. In Hainan province, Xiaoyu appeared at Boao Forum, providing trial ride for Chinese and foreign guests; In Guangzhou, Xiaoyu became anti-epidemic “artifact”and transport materials for quarantine area ; In Changsha, Xiaoyu appeared in Huanghua International Airport and carried out the first in-landing-field passenger transportation test by a driverless bus in China and even the world; In Xiongan and Qingdao, Xiaoyu has also carried out demonstration operation successively. More and more scenes have witnessed the acceleration of the implementation of Yutong's overall intelligent travel solution.

In the future, Yutong will bring more excellent and convenience traveling experience for people with the application of Yutong intelligent driving bus in more areas. Therefore, people can feel the beauty and wonder of future travel through the cutting-edge intelligent technology.